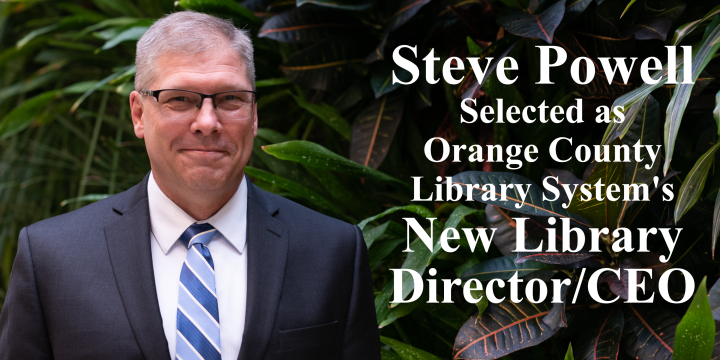 On behalf of the Orange County Library System Board of Trustees, I would like to congratulate Interim Director/CEO & COO Steve Powell on being selected to become the library’s new Library Director/CEO.

Steve was the top choice among three finalists, all of whom had impressive backgrounds in library service. After an eight-month-long nationwide search, interviews by the library’s Director Search Committee in July, and final interviews on August 20, the Board agreed that Steve was the right choice to lead OCLS into the future.

What made Steve stand out among the other candidates was the institutional knowledge he brings to the role, and the initiative he has taken over the past seven months as Interim Director to not just keep things running smoothly at OCLS, but to keep things moving forward. He worked very hard to ensure that progress on the new library branches planned for Horizon West and Lake Nona did not stall while waiting for a new director to be named, and due to his hard work and diligence, we now have signed leases for both sites.

Steve also expresses a vision for OCLS that I am confident will propel our system forward. He understands the need for the library to be more engaged with our community, and he understands the changes this library system needs to make to become more accessible, approachable and vital to our customers.

Under his direction, the library has already made some exciting new enhancements to its operations, including extending automatic renewals for materials, which reduce the likelihood that users will be burdened with late fees; reducing barriers to use by creating new partnerships that allow farmworkers and kids living in foster homes to access library services; and the introduction of a Diversity Equity Inclusion and Accessibility (DEIA) Committee to help OCLS cultivate an environment in which everyone in our community and on our staff feels they belong. Steve also has a long and respected tenure at OCLS, having worked his way up from being the library’s Service Manager in 2007, to its Facilities and Operations Department Head in 2011, to becoming its Chief Operating Officer in 2018. He was appointed to the role of Interim Director/CEO in January 2022, which has given the library’s staff, board and community partners an opportunity to get to know him better.

Steve’s commitment to OCLS and his fresh approach to how we serve our community is inspiring. I am excited about the future of OCLS under his leadership.

library director
library
ceo
Comments and postings by library patrons do not necessarily reflect the official position of OCLS or its staff. All comments and posts are public records. Patrons are strongly encouraged to protect their privacy when commenting or posting on social software tools.
About